Launch of a New Irish Language App for Children: A hAon, a Dó, a Trí.

Home > news > Launch of a New Irish Language App for Children: A hAon, a Dó, a Trí.

It is often said, the best way to learn a language is through song. With this in mind, Conradh na Gaeilge Charn Tóchair has created a new Irish language app with animations of rhymes and songs for young children.

The app was launched officially by Deputy Chairperson of Mid Ulster Council, Christine Mc Flynn. Niall Comer, President of Conradh na Gaeilge was also in attendance at an event held in An Coire Arts Centre. He spoke of the importance of projects like this, which help reinstate Irish as a spoke language.

Children from Rang 2 came over from Bunscoil Naomh Bríd. The 10 songs and rhymes were shown on the big screen and they all thoroughly enjoyed it.

The app is simple in design and features 10 songs and rhymes. The app is suitable for teachers and naíscoil leaders to use in the classroom, but also for families raising their children with Irish and for parents and carers with little or no Irish who would like to learn along with their child. This is a great way to bring more Irish into your home, and for parents and children to learn and sing the songs and rhymes together.

The project was funded by Foras na Gaeilge and Mid Ulster Council. We would like to thank our funders for believing in this project, to all our contributors, everyone who helped with the selection of rhymes and songs and everyone who performed on the recordings.

The free app is available to download on Android and Apple through Google Playstore and Apple i-Store and direct from this site. 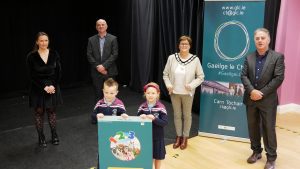